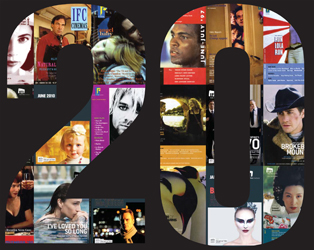 The IFI is getting ready to celebrate 20 years in Temple Bar and is planning a month full of events, parties, talks, tours and more!

This September, the IFI will be celebrating 20 years in its landmark premises, the old Quaker Meeting House at number 6 Eustace Street. To mark this special occasion the IFI will be a planning a host of events to celebrate all that has happened in the last 20 years at the IFI but most importantly, it will celebrate you, our audience! In the last two decades the IFI has seen over 3.1 million cinema attendances to see 63,000 screenings of over 5900 different films. The most popular of those films was The Diving Bell and the Butterfly with 11,000 attendees in 2008, and which narrowly edged out the previous IFI favourite Crouching Tiger, Hidden Dragon. The IFI Café Bar has been kept busy serving over 1.78 million cups of tea and coffee to audiences that include over 8,000 members. The IFI Irish Film Archive is now preserving 611 different collections with over 26,000 cans of films, the oldest of which, a Lumiere brothers film of Dublin and Belfast, dates back to 1897.

Planned events for IFI20 include:

1992 Day To kick off September, we will celebrate our inception with all things 1992! Expect the first film ever shown at the IFI, Waterland, introduced by its stars Jeremy Irons and Sinéad Cusack; a special 1992 screening of Wayne’s World, and  a bumper free table quiz with super prizes! To top it all off, we will have 1992 prices for teas and coffees at our Cafe/Bar and – for those born in 1992 – the first 20 customers who arrive in person at the Box Office from 12.30pm (with proof-of-age I.D.) can get a year’s membership for FREE.

20/20: Landmark Films at the IFI: Films from the last 20 years that have shaped the IFI will be screened throughout the month

IFI20 Open Weekend Following on from our hugely successful Open Day, we are holding a full weekend of free screenings. Yes, FREE! Plus, don’t forget to vote for the film you’d most like to see on the big screen during the Open Weekend in our Audience Poll!

Interactive QR Code Trail  Lots has happened in the IFI over the years – why not scan the QR codes on special signs throughout the building and see what stories they reveal?

Party! No birthday is complete without a good old fashioned knees-up! Expect live DJs, BBQs and visuals all with a special film theme on our IFI Open Weekend

IFI20 Afternoon Talks (Quakers on Eustace Street and Architecture of the IFI) We will be talking to the people behind the building – O’Donnell & Tuomey on the concept behind this landmark building; and previous tenants the Quakers will talk about life in Eustace St pre IFI.

Academy and Emmy Award Statuettes donated by renowned Set Designer Josie MacAvin to the IFI Irish Film Archive have been put on permanent display in the IFI Foyer as part of our celebrations.

Other events include a very special IFI Family Screening;  the launch of IFI Education’s Film Focus; an audience panel for The Critical Take, IFI20 Illustrations and much much more.

More details to be announced shortly!