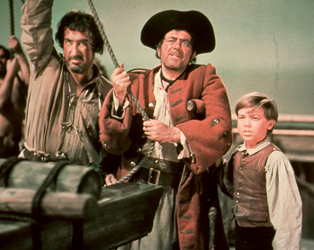 There may be pirates all over the cinemas in June, but they’ll be no match for this 1950 adaptation of the classic Robert Louis Stevenson story. As the first live action film from Walt Disney, the studio went all out to create a swashbuckling, rip-roaring adventure on the high seas with unforgettable characters, in particular Long John Silver and his shoulder-balancing parrot, Captain Flint.

Guided by young Jim’s treasure map, and a motley crew aboard the good ship Hispaniola, they set out for the West Indies in search of buried treasure. Avast me hearties and join us for some buccaneer cinema gold!