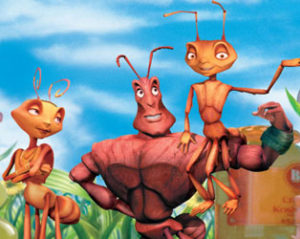 The ants living under General Mandible’s dictatorship all know their place – you’re either a worker or warrior. Z, a worker, is fed up with his lot.  He wants to stand out from the crowd. In a bar one night he meets Princess Bala (Sharon Stone) and the pair are drawn to each other. To impress her, Z switches jobs with his warrior friend, Weaver (Sylvester Stallone). When Mandible wages war with the neighbouring termites, Z gets caught up in the fighting. How will he survive?

With its combination of terrific voice casting, a great script and groundbreaking animation this Dreamworks film raised the bar for animated feature films.