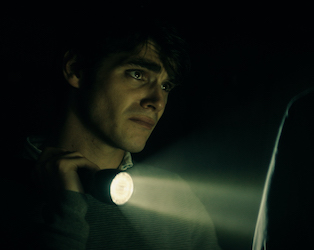 October 6th 2020: This Halloween, the films are coming from inside the house… as the bloodiest event in the Irish film calendar, IFI Horrorthon, goes online nationwide on the IFI’s new video-on-demand platform IFI@Home – www.ifihome.ie – for its 2020 edition. The festival, which opens on Thursday, October 22nd will present 22 features from around the world, plus a special recorded Q&A with the legendary Joe Dante, director of beloved classics including Piranha, Innerspace and Gremlins.

The festival will open with Matthew John Lawrence’s raucous horror comedy Uncle Peckerhead, which sees a man-eating demon tag along as a punk band’s driver, while Damien McCarthy’s Cork-based Caveat will screen on Friday 23rd. Filmed in Bantry, West Cork, the film focuses on a man suffering from memory loss who accepts a job caring for a woman in an isolated and abandoned house.

Speaking about this year’s festival, Horrorthon spokesman Mick Fox said, “In a very, very tough year it was the hardest Horrorthon to put together, but having persevered and sought out truly great titles, the festival is an achievement we did not expect, and is one that we feel will not let the fans down. The main goal was not to disappoint anyone by not having a festival this year, but to fight on, and make it the best event possible, and that’s exactly what it is. Everyone’s in for a great time!”

Charlie Steeds’s hotly-anticipated Death Ranch, which centres on three African American siblings on the run who unwittingly find themselves hiding out on the property of a cannibalistic Ku Klux Klan cult, will screen on Saturday 24th, with Derek Carl’s remake of Joseph Green’s 1962 mad scientist classic The Brain That Wouldn’t Die screening on Monday 26th.

Like last year’s Horrorthon, this year’s line-up features a fantastic array of films from around the world including retro chiller Red Screening from Uruguay, Breeder from Denmark, Violence Voyager from Japan, Butchers from Canada, and Ropes from Spain. Further online screenings include Justin McConnell’s documentary Clapboard Jungle, the H.P. Lovecraft-inspired The Deep Ones, and Slovenian vampire comedy The Curse of Valburga.