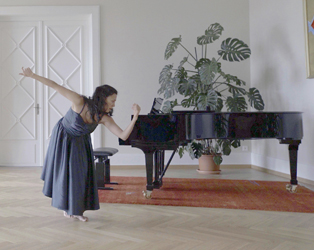 The screening was followed by a Q&A with director Áine Stapleton, hosted by Dr. Aoife McGrath (QUB).

In 1915, James Joyce and Nora Barnacle travelled with their young children Giorgio and Lucia to Switzerland to escape the turmoil of
World War I. Lucia later trained as a dancer and performed throughout Europe. Her career ended when, in the early 1930s, she was forced into psychiatric care and underwent treatment at various hospitals across Europe.

Horrible Creature is the second in a proposed trilogy of films directed by Áine Stapleton (dance and film artist) and is filmed at locations
in Switzerland where Lucia spent time. The first, Medicated Milk, challenged the accepted biography of Lucia’s life and considered the complexity of mental instability.