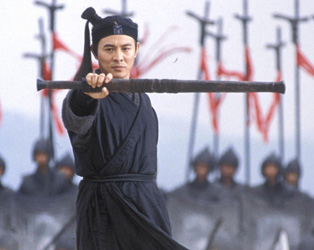 From his great passion for East Asian action film, IFI projectionist Paul Markey has chosen this example of the wuxia genre for October’s Bigger Picture.

Director Zhang Yimou, one of the leading Fifth Generation filmmakers of China, followed his earlier dramas with this extravaganza that moved martial arts into the realm of ballet, philosophy and poetry. In pre-Imperial China, Jet Li is storyteller and warrior Nameless, who gets an audience with the war-mongering Emperor. Recounting how he killed off three assassins, we are given three versions of the same story, each of which could be true or false, and which demonstrate the martial arts feats of Maggie Cheung, Ziyi Zhang and Tony Leung.