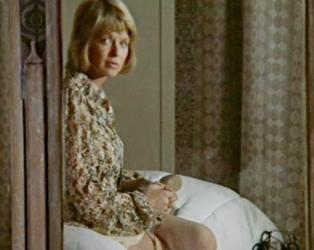 Shot in Wicklow in 1971 with a mostly Irish crew, Altman’s Images is one of the director’s most powerful and underrated works. Winner of the Best Actress Award at Cannes for her performance, Susannah York plays Cathryn, a disturbed author whose husband brings her to an isolated cottage after she suffers a traumatic hallucinatory episode in their London home.

Haunted by visions of a deceased lover however, Cathryn increasingly struggles to distinguish between reality and a wholly convincing set of illusions.  Shot by Vilmos Zsigmond and narrated by York reading passages from her own dreamlike children’s book, this is a uniquely visual study on the relationship between perception and human consciousness.

Also screening as part of the As Above So Below season which runs from the May 6th to 31st at the IFI.

Present your IFI cinema ticket from any of the IFI & IMMA: As Above, So Below season screenings at the IMMA Box Office and receive a 2 for 1 entry to the ‘As Above, So Below’ exhibition at the Irish Museum of Modern Art.