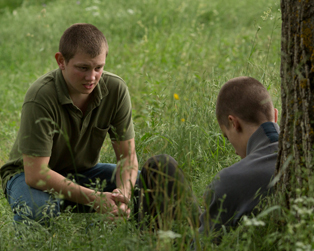 The screening on Friday 16th will be followed by a Q&A with Cédric Kahn, hosted by Dr Tony Tracy of NUI Galway.

22-year-old Thomas (newcomer Anthony Bajon) joins a community of reformed drug addicts living in mountain isolation, dedicating their lives to prayer as a cure. At first rebellious, Thomas gradually commits to this ascetic life, working the land and praying under the supervision of a ‘guardian angel’, Pierre (Damien Chapelle). With simplicity and grace, Kahn depicts this gentle way of life in a non-judgemental fashion, portraying with great skill the depth of Thomas’ struggle with identity.