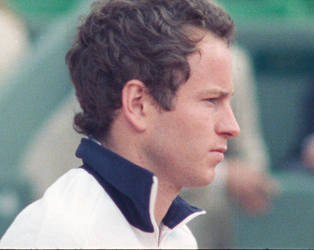 ‘Movies lie, not sports’ declares Jean-Luc Godard in a 2001 interview for L’Équipe. In the early 1980s Gil de Kermadec filmed tennis players at the French Open, John McEnroe amongst them. Unconcerned with the match itself, director Julien Faraut uncovered his 16mm footage, which studies the player and offers an astonishing and unprecedented look at technique in a way never seen before, revealing connections between sport, cinema and art. (MPR)

Director’s Note: In this fascinating film-essay narrated by Mathieu Amalric, Faraut deconstructs the material to focus on McEnroe’s inherent theatricality and tension, portraying a tennis legend at the height of his power (and his rage).