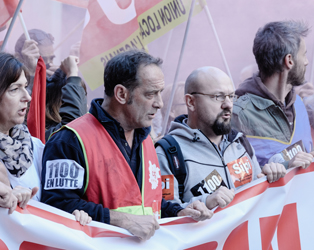 The sudden closure of a profitable automobile parts factory in the French city of Agen causes the loss of 1,100 jobs. An ensuing protest led by union rep Laurent (Vincent Lindon, Best Actor winner at Cannes for The Measure of a Man which featured in our 2015 Festival) spirals out of control in Stéphane Brizé’s urgent, topical drama. The sense of outrage at the plight of workers caught in the relentless gears of capitalism is conveyed through Brizé’s restless, documentary approach to the material, his tight focus alternating between fraught boardroom negotiations and escalating street protests.

Director’s Note: Between raw documentary and reportage, we are plunged into the heart of protest marches and hard-hitting discussions.

Screening as part of the IFI French Film Festival – November 14th to 25th.