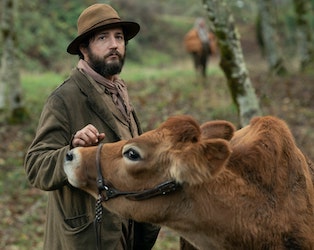 In the 1820s, ‘Cookie’ Figowitz (John Magaro), a taciturn loner, and skilled cook, as his name implies, travels west to the Oregon Territory, where he crosses paths with King Lu (Orion Lee), a Chinese immigrant on the run from a murder charge, and seeking to make his fortune. The two soon team up on a dangerous scheme to steal milk from a Jersey cow – the first, and only, in the territory – belonging to a wealthy local landowner, superbly played by Toby Jones. First Cow, a disarming, warm-hearted tale of an unlikely and tender friendship, is Kelly Reichardt’s second foray into eccentric western territory after Meek’s Cutoff in 2010. As ever, Reichardt’s approach is deceptively low-key, calm and unshowy, but her tonally perfect, beautifully paced miniature carries with it a resonant humanist message.