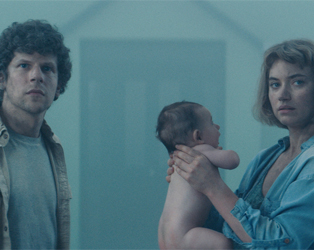 The anxiety of house-hunting takes on a nightmarish dimension in Lorcan Finnegan’s accomplished second feature, a lean psychological thriller made with clockwork precision which offers a wry commentary on the creeping malaise of suburban married bliss. In the market for a new home, school teacher Emma (Imogen Poots) and her boyfriend Tom (Jesse Eisenberg) pay a visit to Yonder, an almost too perfect new housing development. Disquieted by its sterile homogeneity, and the peculiar behaviour of their realtor, they attempt to leave, yet are confounded as the rows of identical houses become an inescapable maze. With great economy, Finnegan, working from a script written by Garret Shanley, swiftly establishes his surreal scenario, drip-feeding information and introducing elements of science-fiction and even horror as the terrified couple begin to realise that there may be no escape from suburbia.