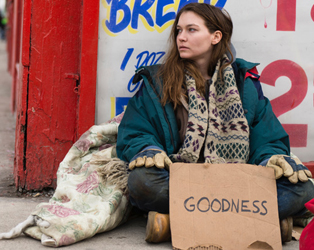 This film was released 16th March 2018, and is no longer screening.

The 18.20 screening on Friday the 16th of March will be followed by a Q&A with director Alan Gilsenan, hosted by Sinead Gleeson.

Reta Winters (Catherine Keener) has many reasons to be happy: her three teenage daughters, her twenty‐year relationship with her husband, and her work as a successful translator and novelist. But suddenly, all the quiet satisfactions of her life disappear when her eldest daughter, Norah (Hannah Gross), drops out of college and leaves home for a Toronto street corner, refusing to speak and holding a sign that says simply ‘Goodness’.

The film follows Reta and her family as they struggle first to ‘rescue’ Norah, then to understand her incomprehensible decision, and finally to accept her strange path and include her as she is as best they can.