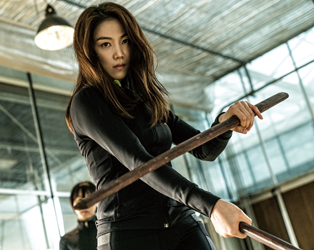 This film was released on Friday 15th September 2017 and is no longer screening.

In The Villainess, Sook-hee (Kim Ok-bin, Thirst) is thrown into a new role after she escapes from her violent past, providing moments of domestic contrast and even a new romance with the handsome Joong (Shin Ha-Kyun), but things are never what they seem as timelines past and present collide in a climactic conflagration.

Director Jung Byung-gil knows how to grab an audience’s attention, as in the breathless, rain-soaked opener of 2012’s Confession of Murder. The opening sequence of this film is equally astonishing, as one of the most tremendous action set pieces of the year plays out from first person in a whirlwind of guns and blades and bad guys.

He keeps the action high octane with memorable moments including a motorcycle-bound sword fight and an unbelievably kinetic finale, with fluid camerawork linking each strike and slash.