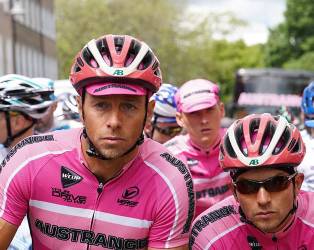 Summer 1998. The opening stages of the Tour de France have been relocated to Ireland. Fictional Belgian rider Dom Chabol (Louis Talpe) has been one of the best support riders on the Tour for the last 20 years. It’s a sacrificial role – setting pace, blocking wind, and providing support to enable the team’s sprinter to victory – winning is not an option. But Dom secretly harbours a desire to wear the yellow jersey – just once before his career is over.

The fictional story is set against the real events of the 1998 Tour de France which was dogged by doping scandals. Dom and most of his teammates partake in daily drug infusions from trainer Sonny (Iain Glen) which allow them to maintain superhuman speeds and strength but at the expense of their physical and mental health.  A young doctor (Tara Lee) becomes close to Dom and increasingly concerned for his welfare.

Kieron J Walsh’s feature makes for riveting viewing with exhilarating race sequences on the roads around Ireland and a very well-defined muscular performance from Louis Talpe.