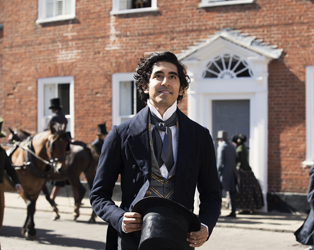 This film was released on 24th January 2020, and is no longer screening.

Armando Iannucci (The Thick of It, The Death of Stalin, Veep) brings his signature brand of firecracker wordplay and giddy energy to bear on this delightfully idiosyncratic adaptation of Dickens’s beloved novel. The semi-autobiographical tale of poverty and class in Victorian London is energised through breathless staging, playful visual flourishes and outsized performances from an ensemble of British talent (Tilda Swinton, Hugh Laurie, Ben Whishaw and Peter Capaldi, to name but a few).

There is nothing stuffy about Iannucci’s vision, his most immediate innovation being the colour-blind casting, a decision which brings vitality and currency to the film. As such, Dev Patel inhabits the title role, playing Copperfield as an unwavering optimist, in spite of the vicissitudes Dickens’s complex plot throws his way.