Rory (Jude Law), an ambitious entrepreneur and former commodities broker, persuades his American wife, Allison (Carrie Coon), and their children to leave the comforts of suburban America and return to his native England during the 1980s. Sensing opportunity, Rory re-joins his former firm and leases a magnificent country manor, with grounds for Allison’s horses. Soon the promise of a lucrative new beginning begins to unravel, and the couple must face the unwelcome truths lying beneath the surface of their marriage. Other than Southcliffe, the chilling four-part series he directed for Channel 4, The Nest is Sean Durkin’s first feature film since Martha Marcy May Marlene announced him as a major new talent in 2011; among the finest films of this year, it reconfirms his uncommon mastery of tone, atmosphere, and pacing, his attention to detail, and his ability to elicit nuanced performances from an exceptional cast. 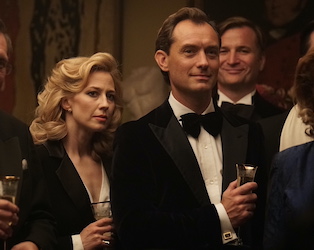