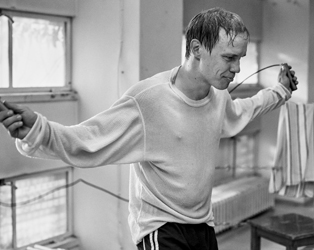 This film was released on Friday 21st  April 2017 and is no longer screening.

Winner of the Prix Un Certain Regard at last year’s Cannes Film Festival, Juho Kuosmanen’s heart-warming début feature tells the true story of one of the biggest events in Finnish sporting history, in which the titular boxer had a shot at the world featherweight championship title. In order to compete, Olli (Jarkko Lahti), previous winner of the European lightweight title, must lose weight, a difficult task when added to his existing training regime.

As excitement grips the nation, Olli is elevated to the rank of national hero, and must endure the attendant media circus. However, he has little confidence in his chances of winning and would prefer instead to pursue Raija (Oona Airola), the woman with whom he has fallen head-over-heels in love. Beautifully crafted and performed, it’s a film of genuine sweetness that is sure to charm audiences.