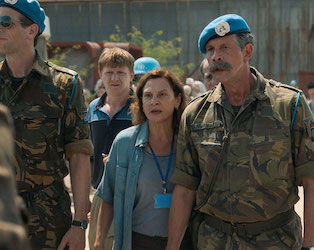 In 1995, during the Bosnian War, over eight thousand Muslim boys and men were massacred, and countless women raped, by Serbian forces at the town of Srebrenica in the worst act of genocide in Europe since the Second World War. Schoolteacher-turned-translator Aida (Jasna Đuričić) works with the locally stationed UN battalion of Dutch soldiers protecting the town and its inhabitants. Residents, including Aida’s husband and sons, flock to the UN compound for sanctuary as the heavily armed Serbs approach. As she attends successive meetings, it becomes apparent to her that the Dutch soldiers and the UN itself are completely ineffectual in the circumstances, and that she must act herself to save her family in this fierce, brave, and moving film.