Phil Lynott: Songs for While I’m Away

Telling the story of a black, working-class boy who comes of age in 1960s Dublin, this feature documentary from maestra Emer Reynolds (The Farthest) paints a warm and detailed portrait of one of Ireland’s greatest rock legends.

As lead singer of Thin Lizzy, Phil Lynott was a singer, composer, dreamer and occasional hellraiser. The film explores the man and his music through his own words and through interviews with a glittering array of admirers, friends and family, each speaking with warmth, authority and great dollops of humour about his public and private life. Reynolds chooses to focus meticulously on the creation of a powerful and varied body of work rather than dwell on the drink and drug dependency that blighted Lynott’s latter years before his death at 36, to create a work that will satisfy diehard fans and intrigue those not yet converted. 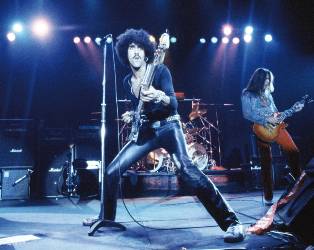