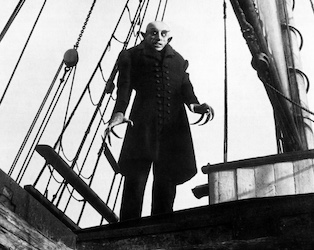 This screening will be introduced by Prof Jarlath Killeen of Trinity College Dublin.

Celebrating its centenary in the same year that Dreyer’s Vampyr reaches its ninetieth anniversary, F.W. Murnau’s deathless classic retains its chilling power, filled with unforgettably eerie imagery. It is one of the most enduring films of the silent era, a classic example of German expressionist cinema, and a film hugely influential both on and beyond the horror genre. Although not authorised by the Stoker estate, who in fact tried to suppress the film and have all existing prints destroyed, it is, despite some cosmetic changes, considered the first cinema adaptation of Dracula. When estate agent Thomas Hutter (Gustav von Wangenheim) visits a Transylvanian client, the mysterious Count Orlok (Max Shreck), it sets in motion a chain of events that sees Hutter and his beloved wife Ellen (Greta Schröder) drawn into a world of supernatural terror.