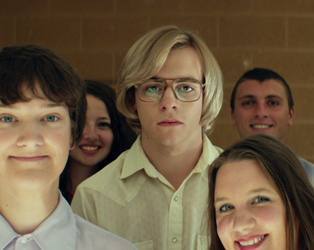 IFI FILM CLUB – Join us for an open discussion following the 18.15 screening on Thursday 7th.

Based on the acclaimed graphic novel, My Friend Dahmer is a memoir of the author’s time in high school with the future serial killer. In Ohio in the late 1970s, Jeffrey Dahmer (Ross Lynch, a Disney TV star cast brilliantly against type) is a social outcast whose main hobby is dissolving roadkill in acid. At school, he is befriended by a trio who enjoy his disruptive behaviour, pushing him to ever more extreme displays. At the same time, his parents’ marriage is collapsing due in large part to his mother’s mental illness.