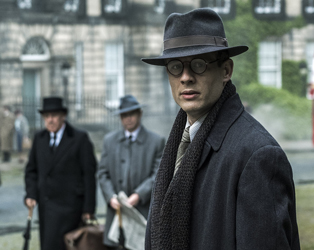 This film was released on 7th February 2020 and is no longer screening.

Ambitious Welsh journalist Gareth Jones (James Norton) travels to Moscow in an attempt to secure an interview with none other than Stalin himself. Hearing rumours of a government-induced famine, Jones covertly visits Ukraine where he bears witness to the atrocities of man-made starvation. Deported back to London, Jones publishes an article revealing the horrors he experienced, yet is accused of being a liar by those who have an interest in silencing him.

As the death count in Ukraine mounts, Jones must fight to have his incendiary story published. Oscar-nominated director Agnieszka Holland (Europa Europa, In Darkness) brings to the screen the extraordinary and powerful true story of the journalist who blew the whistle on Stalin’s genocidal famine, which killed almost 10 million people between 1932 and 1933.