Inspired by the true story of the escape by 38 IRA prisoners from the notorious Maze Prison in 1983 (which left one prison officer dead and others seriously injured), Maze is a post-hunger strike narrative
which eschews jailbreak high-jinx in favour of intense character-driven drama.

IRA prisoner Larry Marley (Tom Vaughan-Lawlor), plans his escape with unwavering determination, despite the reservations of fellow inmate, Oscar (Martin McCann). When he realises world-weary prison warder Gordon Close (Barry Ward) may be useful for his plan, he manages to nurture a relationship which will have far-reaching consequences for them both. Filmed in a recently decommissioned Cork prison, Stephen Burke re-engages his interest in Northern Irish narratives to deliver a tonally authentic, largely non-partisan drama which explores how ordinary people survive in extraordinary circumstances. 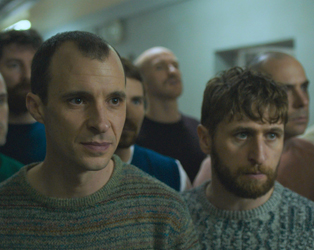