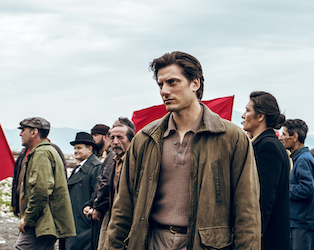 Best remembered as the writer of adventure novels set in the natural world such as The Call Of The Wild (1903) and White Fang (1906), American author Jack London was also a committed activist for socialism. Inspired by the differences of the central character of London’s semi-autobiographical Martin Eden (1909) from his creator, Pietro Marcello’s relocation of the story to an Italy with a fictional history offers an intriguing take on the story. After saving a young man from a beating, sailor Martin (Luca Marinelli) is shown some gratitude by the wealthy parents, though this is rescinded when there is an attraction between their daughter and Martin, who they believe beneath her. His subsequent attempts to rise to her station through writing meet rejection at every turn, and Martin enters a downward spiral as he strays further from his roots.