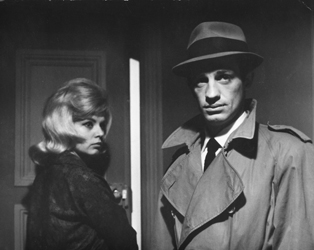 This film was released on Friday 11th  August 2017 and is no longer screening.

A French slang word used to refer to a police informant, Le Doulos was adapted by Melville from the 1957 novel of the same name by Pierre Lesou. A film noir crime drama in which nothing is quite as it seems, the story focuses primarily on Silien, a mysterious gangster who we are led to believe might also be working for the police, played by the legendary Jean-Paul Belmondo.

Often cited as a major influence on Tarantino in the making of Reservoir Dogs, an intricate plot of deceit and revenge reveals a set of characters ready and willing to say or do anything to extricate themselves from whatever trouble they find themselves in.

Betraying the influence of American gangster movies of the 1930s, Melville clearly relishes this grimy criminal underworld and offers up a film that is unusually layered and surprisingly drastic for its time.