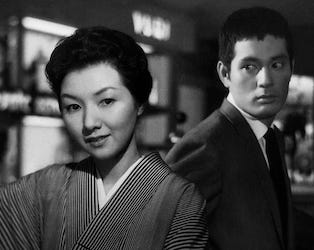 Keiko (Hideko Takamine), a widow who remains faithful to her late husband’s memory, manages a whisky bar in Tokyo’s Ginza district; every night she ascends the stairs and forces herself to drink, joke, and flirt with wealthy businessmen. At the age of thirty, however, Keiko has reached ‘the turning point in a woman’s life’ and faces a stark choice to either remarry or, with the help of her admiring patrons, to open a bar of her own. Naruse’s masterpiece derives its power from its remarkable range of subtle, nuanced performances, especially that of Hideko Takamine who portrays Keiko’s complex motivations with heartrending delicacy. The atmosphere of late ‘50s Tokyo is strikingly evoked, while the xylophone jazz score further strengthens the impression of metropolitan modernity.