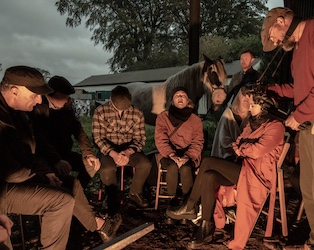 A look back at the life and songs of the traditional ballad singer and songwriter Liam Weldon (1933 – 1995).

A great admirer of Traveller music and a strong advocate for aural tradition, Weldon was notoriously wary of self-promotion, and left behind little in the way of recordings. But his legacy is more alive than ever today and flourishes in a new generation of folk singers.

With newly discovered archive footage, stories from family and friends, and powerful performances of his work by Damien Dempsey, Radie Peat (Lankum), Lisa O’Neill and Daoirí Farrell, the film reveals much about the musician and about the family man, who gave so generously to the community in Ballyfermot where he lived.

Myles O’Reilly, prolific director of music films and himself a composer, celebrates the personal, public and political aspects of Liam Weldon, in this lively and insightful investigation.

This screening will be followed by a Q&A with director Myles O’Reilly, hosted by vocalist, composer and filmmaker Macdara Yeates.