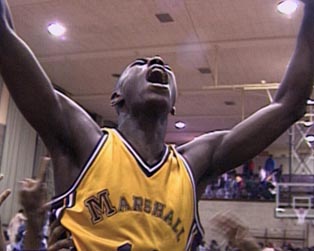 This film screened on 6th November 2019.

First screened at the 1994 Sundance Film Festival, where it won the audience award for best documentary, Steve James’s Hoop Dreams is the remarkable true story of two American dreamers; an intimate reflection of contemporary American inner-city culture, following two ordinary young men on the courts of the game they love. Plucked from the streets and given the opportunity to play basketball at a suburban prep school, William Gates and Arthur Agee both soon discover that their dreams of NBA glory become obscured amid the intense pressures of academic success, family life, economics, and athletic competitiveness. The two boys remain focused on their dream, no matter how hard tragedy strikes or how desperate their situation becomes. Filmed over five years, with unprecedented access, Hoop Dreams is regularly cited as one of the greatest contemporary American films.