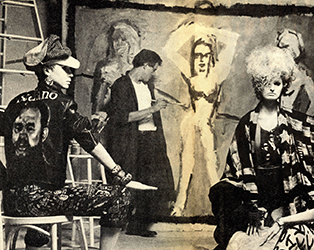 “There was this kind of mania to be noticed…”

Our collective cultural obsession with all things downtown and dirty from pre-gentrification New York City is supremely catered for by the insanely high drama of Make Me Famous.

Manhattan is still in thrall to ultimate Art God, Andy Warhol, and in an era where you can’t swing a paint can without hitting a new artist, the unknown painter Edward Brezinski wants to make it big.

While rising stars like Jean-Michel Basquiat and Keith Haring emerge from the party-n-paint lifestyle of the East Village and Lower East Side, Brezinski’s tale is a campy yet earnest exposé of what it took to survive the rough and tumble of America’s last great art explosion.

The film includes never-before-seen archive video of the 1980s art scene, including clips of the era’s most influential art films, while the archival footage of Manhattan at its grimy and glamorous best has to be seen to be believed.

For lovers of… Wojnarowicz: F**k You Faggot Fucker, The Andy Warhol Diaries