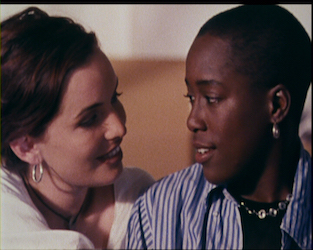 To pre-order The Watermelon Woman, click here. The film will be available to view from Saturday, October 3rd at 20.45.

A rare screening of Cheryl Dunye’s seminal work: an homage to the forgotten black women of cinema, and a gamechanger for black lesbian identity on screen.

Dunye herself plays Cheryl, a young woman who works behind the desk of a video store in Philadelphia. Cheryl becomes fascinated by one particular black actress – known only as the Watermelon Woman – and embarks on a quest to find out more about her. Along with her friend and erstwhile sparring partner, Tamara, Cheryl discovers astonishing things that upend her perception of this woman. All this while getting to know the alluring (and white) Diana.

With the perfect blend of comedy and intelligence, black heritage and lesbian lore, The Watermelon Woman is totally romantic to its core. A pillar of the New Queer Cinema cinema movement, it’s a film that’s not to be missed.