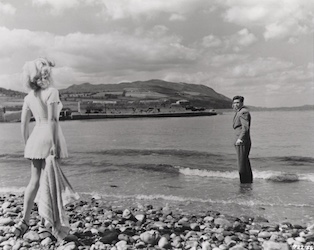 We relaunch From The Vaults with a screening on 35mm of one of the IFI Irish Film Archive’s most delightful comedies.

In this early Ealing comedy set in Dublin, the aptly-named Gulliver Shields (Robert Beatty) is a bored civil servant who yearns to escape his dull life and sail to the South Seas. Lacking the 200 guineas for the fare, he concocts a money-making scheme, sitting all day at the dangerous junction of Dame Street and College Green and waiting to witness a car accident with a wealthy victim and a handsome reward.

Life gets complicated with the arrival of wealthy, itchy-footed Alistair MacNeill (Stanley Holloway), and sassy young motorist Jennifer (Moira Lister), with her dreams of domestic bliss. This charming comedy, directed by Charles Crichton (The Lavender Hill Mob), will be particularly pleasurable for local audiences who will enjoy the extensive post-war Dublin street sequences and the south seas of Greystones.