EVERYTHING EVERYWHERE ALL AT ONCE

Dan Kwan and Daniel Scheinert, the directors who collaborate under the ‘Daniels’ moniker, return with the follow-up to Swiss Army Man (2016), that infamously starred Daniel Radcliffe as a decomposing corpse. One of the year’s most eagerly anticipated films, Everything Everywhere All At Once stars the legendary Michelle Yeoh as laundromat owner Evelyn Wang, whose problems with the IRS are thrown into sharp relief when she is plunged into the multiverse in order to defeat a villainous plan to destroy all universes. Yeoh is given numerous opportunities to display the skills acquired over an entire career, from her wuxia mastery to her underrated comic timing. The astonishing brio with which Daniels present their narrative is a joy to behold, but its breakneck invention does not hide the directors’ commentary on the melancholy of ageing and the power of family love. 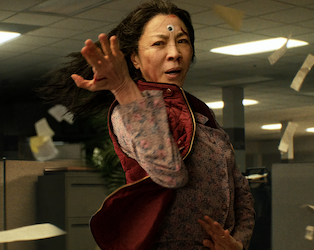