The screening will be introduced by John Maguire, film critic and feature writer for the Business Post newspaper, broadcaster and journalist.

We are delighted to screen this pristine 4K version from the original 35mm negative of Pale Flower, freshly restored by the Shochiku Company in cooperation with the Japan Foundation.

Ex-con Muraki is fresh out of prison, where he served time for murder. Returning to his old yakuza haunts, one of which is an illegal gambling club, where people bet large in the card game called tehonbiki. There he meets the enigmatic and beautiful young Saeko who takes big risks gambling more for the thrill than for the money it might bring her.

Masahiro Shinoda’s classic film noir, part of the ‘Japanese New Wave’ cinema of the 1960s, enduringly shaped the genre of yakuza gangster thrillers. With superb aesthetic and visual style and exquisitely shot in black-and-white and Cinemascope, the stylised city life is elevated by a jazz score by composer Toru Takemitsu. 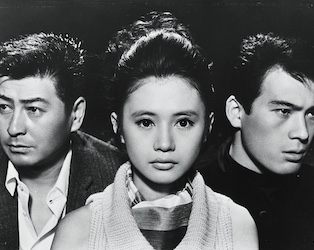