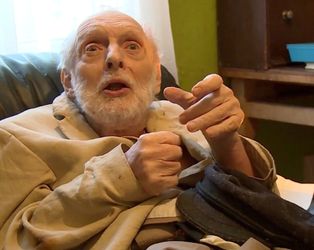 Filmmaker Simon comes to London to look after his dying uncle David, an eccentric, cantankerous, ‘luvvie’ obsessed with King Lear. David has been given months to live but ‘improves’ when Simon arrives and they embark on a five-year odyssey from the squalor of David’s rubbish-filled flat. Simon tries to curb David’s urge to give all his money away to his handsome Brazilian carer and friendly but self-interested neighbours. Despite the house burning down, homelessness, cancer, and the dreaded ‘care home’, Simon helps David to create an exuberant final performance to send him on his way. Though at times painfully intimate, Chambers’s film ultimately celebrates a joyous spirit which transcends the indignities of old age.

This screening will be followed by a Q&A with director Simon Chambers.