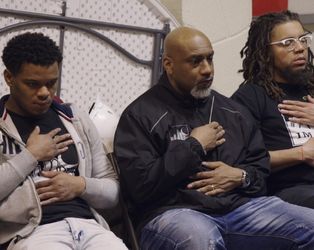 Chicago’s exceptionally high level of gun violence has made national headlines for decades. While the city responds with aggressive policing, two community members from the disadvantaged South and West Sides lead programmes that attempt to break the cycles that produce violence in the first place, by investing in the young men most at risk of being victims or perpetrators. All these Sons, which is co-directed by Bing Liu, whose first feature, Minding the Gap, opened IFI Documentary Festival in 2018, follows three young men as they struggle with their pasts, and, with the guidance of their mentors, hope to construct a better future for the next generation.

This screening will be followed by a Q&A with Marshall Hatch Jr (co-founder of MAAFA Redemption Project), featured in the documentary, and a wine reception in the IFI Foyer.