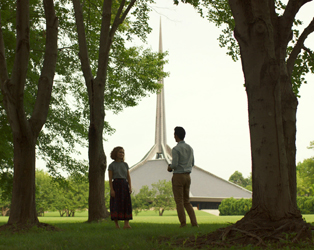 This film was released 5th October 2018, and is no longer screening.

Acclaimed video essayist Kogonada makes his feature debut with Columbus, which sees Jin (John Cho) arrive to the titular city in Ohio to visit his estranged, coma-stricken father, an esteemed professor of architecture.

There he encounters librarian Casey (Haley Lu Richardson), an architecture enthusiast who has put off going to college due to her concern over how leaving the city would affect her meth-addicted mother. The two find an immediate and easy rapport, becoming friends as Casey acts as Jin’s tourist guide to a city famed for its modernist buildings.

The cast features strong support from Parker Posey and Rory Culkin, and while the film is reminiscent of Lost In Translation (Sofia Coppola, 2003) or Richard Linklater’s Before trilogy, it is Kogonada’s visual mastery that marks both film and filmmaker as something truly special, and definitely one to watch.