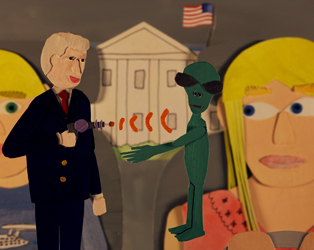 Animator and musician Clyde Petersen’s debut film is an autobiographical stop-motion animation which touches on issues of mental health and gender identity. It recounts the time when 12-year-old Clyde, uncomfortable in the body in which he was born, was brought on a road trip across America by his schizophrenic mother, who had done so without the knowledge of Clyde’s father, who then reported the child kidnapped. Subtle and moving, it’s also laced with humour, best exemplified by a scene in which the two attend a Whitney Houston concert. (Notes by Kevin Coyne.)

The event will begin with a short set from Dublin band Pillow Queens. Live accompaniment to the film will be provided by members of Your Heart Breaks, Clyde Petersen’s musical collective. Tickets €10.