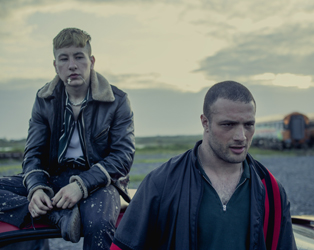 Douglas ‘Arm’ Armstrong (Cosmo Jarvis) is an enforcer for the Devers, a family of criminals in an Irish seaside town. Quicker with his fists than his wits, Arm had a brief moment of glory when he represented his county in boxing, but soon fell from grace. His current position as an attack dog for drug pushers has alienated him from ex-partner Ursula (Niamh Algar) and their young autistic son, with whom Arm is struggling to make a connection. He has a toxic relationship with the volatile Dympna Dever (Barry Keoghan), who manipulates Arm’s inherently trusting nature. As his relationship with Ursula begins to improve, Arm sees an opportunity to choose a better path and prove himself as a parent, just as the Devers force upon him a task that will test the limit of his loyalty.