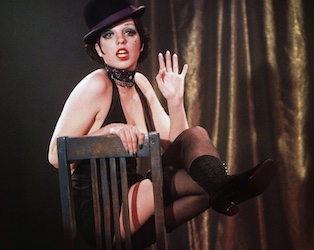 Liza Minnelli shines as the life and soul of every party Sally Bowles, who sings her heart out nightly (‘Money, Money’, ‘Mein Herr’ and ‘Maybe This Time’ to name but a few) in Berlin’s Kit Kat Klub cabaret, while trying to become a star. After welcoming new housemate Brian Roberts (Michael York), she joins him in getting to know the wealthy clients he teaches, and one in particular who they are both drawn to.

Still relevant fifty years on, Cabaret is worlds apart from the Hollywood musicals that came before and after. Taking different elements from the original novel, play and Broadway hit (including Joel Grey as the menacing Master of Ceremonies), director Bob Fosse opted for an authentic and realistic style, keeping musical numbers in the cabaret, while gradually directing our gaze towards the Nazi party’s ascension to power.

Full Bob Fosse Season coming to the IFI in June.