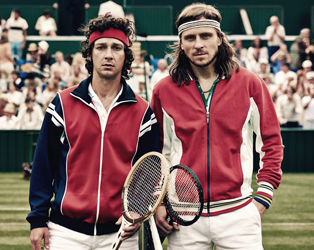 This film was released on Friday 22nd September 2017 and is no longer screening.

Borg/McEnroe tells the story of the epic rivalry between Swedish tennis legend Björn Borg (Sverrir Gudnason) and his greatest adversary, the hot tempered American John McEnroe (Shia LaBeouf, perfectly cast), which came to a head during the 1980 Wimbledon Championships, where a victory would see Borg enter the record books with five consecutive wins.

The hard-fought tournament provides director Janus Metz with a framing device for a series of extended flashback sequences that explorein parallel the teenage years of these two child prodigies.

Perceived as an icily controlled perfectionist as an adult, young Björn is portrayed as being every bit as angry and volatile as his future rival John, his relationship with his exacting coach Lennart Bergelin (Stellan Skarsgård) proving instrumental in his maturation.