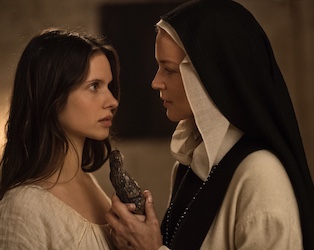 In the 17th century, with plague ravaging the land, Benedetta Carlini (Virginie Efira) is brought by her parents to a convent at Pescia, Tuscany. Later, as a young woman, Benedetta claims to have visions of Jesus and manifests the stigmata, a ‘miracle’ which cynical Mother Superior Felicita (Charlotte Rampling) recognises as politically advantageous. The increasingly powerful Benedetta further scandalises the convent by taking young Sister Bartolomea (Daphne Patakia) as her lover. A typically sly and knowing provocation, Benedetta, which is based on Judith C. Brown’s 1986 non-fiction book, Immodest Acts: The Life of a Lesbian Nun in Renaissance Italy, delights in ruffling conservative feathers with cheekily blasphemous imagery; however, and as is often the case with this director, the sensationalism is underpinned by a serious-minded and pointed treatise on sexuality, gender, power, and politics in a hypocritical, male-dominated environment.