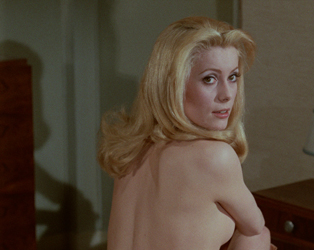 One year into their marriage, Séverine (Catherine Deneuve at her most impeccable) and Pierre (Jean Sorel) still sleep in separate beds. Although she is unable to summon any physical desire for her
husband, possibly due to previous experiences of abuse, Séverine has a rich interior life centred on
masochistic sexual fantasies.

When she takes a job working as a prostitute in the afternoons, it offers her an outlet to explore her sexual side. One of Séverine’s regulars is thuggish gangster Marcel (Pierre Clementi), who is perfectly suited to her inclinations but grows possessive, threatening to unspool the life she has created. Buñuel brings a number of surreal touches to the film, which is less about sex than the effects of repression and the interplay between the face an individual presents to the world and their most personal and unrestrained thoughts.