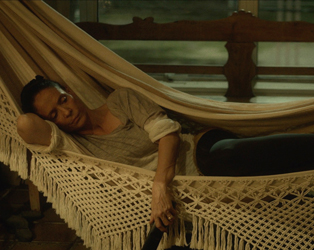 Director Kleber Mendonça Filho’s debut film, Neighboring Sounds (2012), dealt with an entire Brazilian community; for Aquarius, his second feature, he has narrowed his focus to one endlessly intriguing and contradictory character.

Retired music teacher Clara (Sonia Braga) lives in the titular apartment building in the coastal city of Recife, Brazil; an initial flashback establishes she has lived in the same apartment since the early 1980s, and over time it has become an extension of her persona, the repository of her life’s work and memories, with stacks of photographs and her beloved records filling every available space.

However, Clara is the sole remaining occupant of the Aquarius, developers having purchased the building for demolition and coaxed all other tenants to sell up; steadfast in her refusal to leave, she engages in an escalating battle of wits with the realtors.