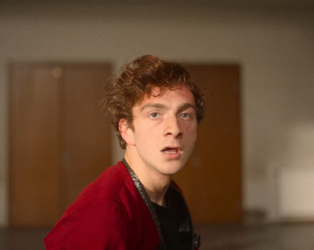 A student of traditional Georgian dance is thrown into a state of confusion when he develops feelings for a male rival in Swedish director Levan Akin’s arresting third feature. Mareb (Levan Gelbakhiani) lives with his working class family in Tbilisi; coming from a dancing lineage, it is expected that he and his brother David will carry on the tradition, though David is more interested in partying than in the rigorous training required to perfect the challenging routines. Mareb has been dancing duets with Mary (Ana Javakishvili) since childhood, and it is understood that they are a couple, though Mary is frustrated by his lack of passion away from the dancefloor. When Irakli (Bachi Valishvili), a gifted dancer from another town joins the company, he awakens in Mareb a heady mix of jealousy and attraction, dangerous feelings in a strictly conservative society.

In association with GCN.