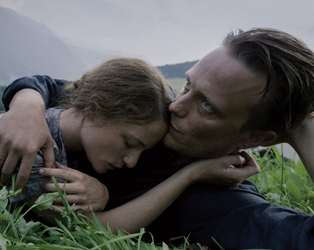 Having pondered questions of contemporary spiritual malaise in Knight of Cups and Song to Song, Terrence Malick is on a surer footing with the true story of Frantz Jägerstätter, a man of faith who pays dearly for his convictions when Nazi ideology sweeps through Europe. Frantz (August Diehl) is introduced tending to the land with his wife, Fani (Valerie Pachner), high on the slopes of St. Radegund, a sublimely beautiful Austrian mountain village. Devout Catholics, they refuse to support the Nazi regime in the wake of the Anschluss in 1938, and when Frantz is conscripted he takes a stand as a conscientious objector, refusing to swear his allegiance to Hitler, a decision which will test the limits of his beliefs.

An intimate epic, A Hidden Life sees Malick revisit themes of faith versus religion, personal responsibility, and the destruction of an Edenic paradise.