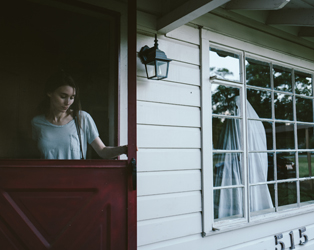 This film was released on Friday 11th  August 2017 and is no longer screening.

An evocative, highly original meditation on life after death and the enduring connections we make to people and places, A Ghost Story reunites director David Lowery (Ain’t Them Bodies Saints) with Rooney Mara and Casey Affleck. When Affleck’s character is killed in a head-on collision, he returns
in spectral form to their home to watch over the grieving Mara, appearing draped in the classic Halloween costume of a sheet with eyeholes cut out, his quietly mournful presence undercutting any initial amusement.

Time becomes elastic for the ghost who is incapable of leaving the house, or the patch of land on which it stands, even as the years become decades. Presented in Academy ratio, with strikingly beautiful compositions, A Ghost Story is a quite literally haunting piece of philosophical inquiry that invites interpretation and debate.