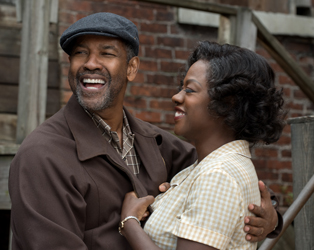 Fences, August Wilson’s play exploring race and familial relations in 1950s Pittsburgh, won the Pulitzer Prize in 1987; plans for film adaptations floundered as they failed to meet Wilson’s stricture that the director must be black.

Working from Wilson’s screenplay, Denzel Washington has now taken on the project, his third behind the camera, which is in many respects a document of the 2010 Broadway revival for which he and co-star Viola Davis won Tony Awards.

Washington plays garbage collector and proud patriarch Troy Maxson, whose ebullient yet irascible exterior hides a deep-seated bitterness and resentment that gradually comes to affect those closest to him, namely wife Rose (Davis) and two sons Lyons (Russell Hornsby) and Cory (Jovan Adepo), whose dreams of becoming a professional footballer remind Troy of his own frustrated ambitions as a pro baseball player.