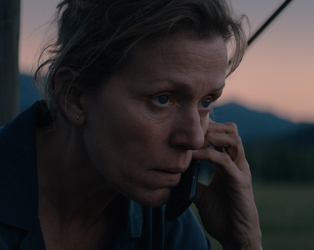 The menu for January 2018 is below:
Chicken Supreme with Asparagus and a Wild Mushroom Risotto
Pan Fried Fillet of Hake with Potato Terrine and Creamy Leeks
Gnocchi in Tomato Sauce with Shaved Parmesan Cheese and Mixed Vegetables

Our monthly pairing of a film and a specially devised menu will be Martin McDonagh’s Three Billboards Outside Ebbing, Missouri – on release from January 12th. The film screening will start at 18.30, with the dinner served directly afterwards in the IFI Café Bar.

Grieving mother Mildred (Frances McDormand), frustrated at the lack of progress in finding her daughter’s killer, erects three billboards challenging the local police department, led by Chief Willoughby (Woody Harrelson), to do their jobs. A biting and poignant study of grief, the supporting cast includes Peter Dinklage and the great Sam Rockwell.