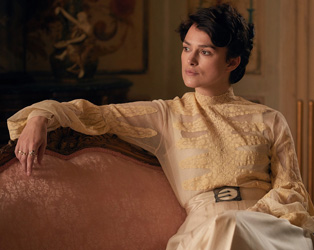 January’s pairing of a new release and a specially devised menu will be Wash Westmoreland’s Colette,
followed by a specially created main course in the IFI Café Bar.

The pioneering life of the titular 19th century French literary sensation is brought to the screen in handsome fashion by director Wash Westmoreland. Beginning far away from the salons of Paris in provincial Burgundy,
young Sidone-Gabrielle Colett (Keira Knightley) is betrothed to the roguish literary impresario Henry Gauthier-Villars (Dominic West). Whisked away to the City of Lights at the height of the Belle Époque, Henry initially encourages her writing, yet takes sole credit for the huge and unexpected success of her racy Claudine series of novels.